You are using an outdated browser

Internet Explorer is not supported by this site and Microsfot has stopped releasing updates, therefore you may encounter issues whilst visiting this site and we strongly recommend that you upgrade your browser for modern web functionality, a better user experience and improved security.

This regenerative farm is revolutionizing the way we produce food

It’s been one year since Bodemzicht – a five-hectare regenerative farm minutes away from the city center of Nijmegen – opened its doors. Over the last twelve months, farmer Anne van Leeuwen has witnessed the power of working together with nature, instead of against it. Not only has she been overwhelmed by the abundance, resilience and sheer production of the garden, but even after such a relatively short period of time, the landscape has already started to bounce back.

“When we came here, the field was empty of life and fifty percent of the soil was completely barren. After a few weeks, the grasshoppers returned and you could hear the field coming back to life. People asked me: ‘Won’t you now have a grasshopper problem?’ Then these beautiful spider wasps came that hunted the grasshoppers, so the balance reestablished itself. Now, almost every day, I see this complexity growing and new species are coming in.”

Visiting Bodemzicht gives people energy, because they see it can be done. It shows them that although some challenges are incredibly complex, doing something about them doesn’t have to be equally difficult.

By not looking at wild species that enter the farm as pests, but as part of the local ecosystem, Anne and her partner Ricardo Cano prove you can grow food in a way that’s beneficial for both people and planet. “A lot of people are sceptical about regenerative farming, because they don’t believe it’s viable or realistic. For example, we don’t use any pesticides, don’t plough or till the soil, which many deem as necessary to produce food. This is why we organize weekly farm tours. Because you can tell people about what you’re doing, but as soon as they can see the abundance and diversity of the garden, they realize you can grow a lot of high quality produce on a relatively small scale whilst restoring nature at the same time.” 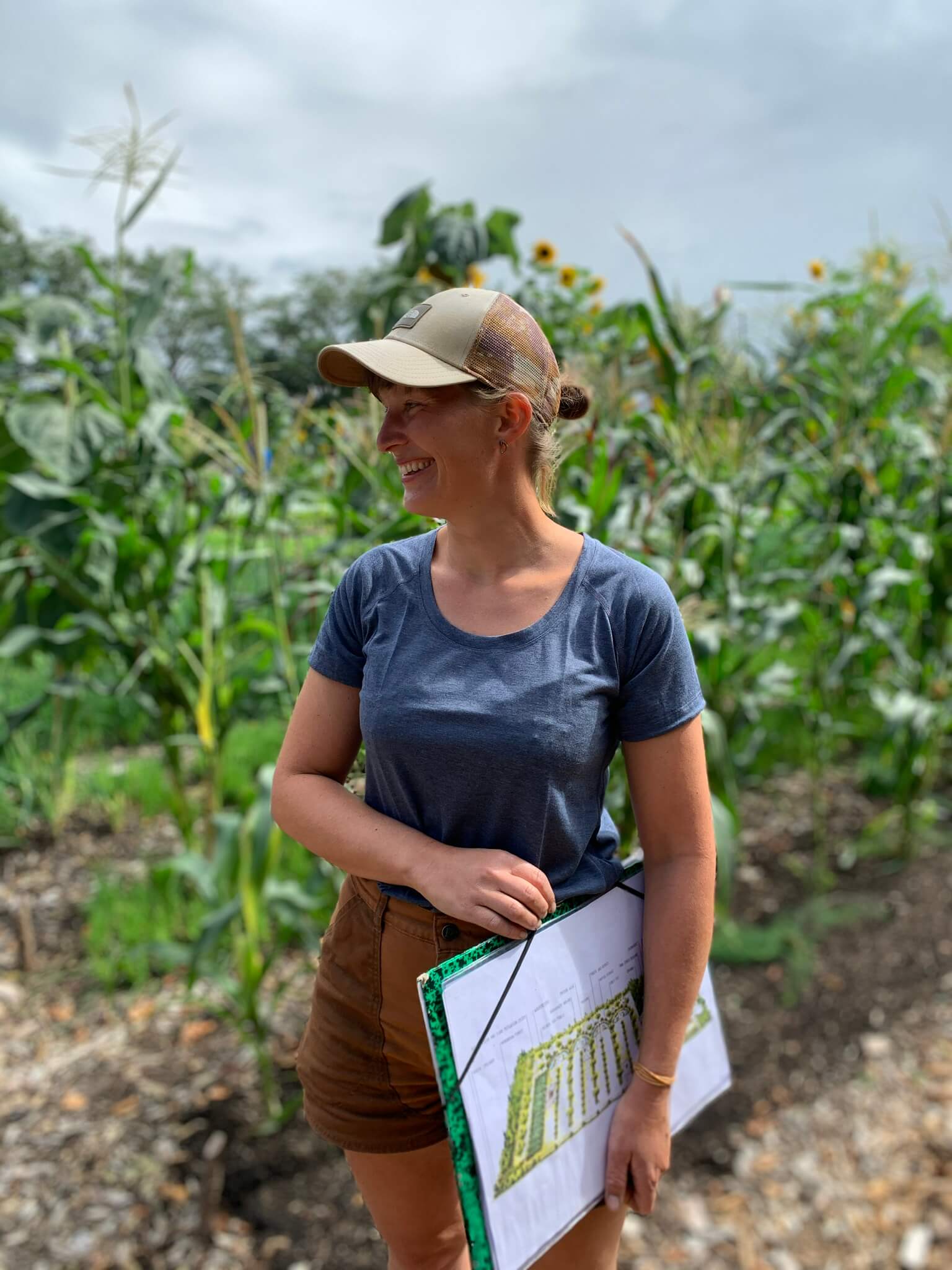 In addition to boosting biodiversity and awareness, by growing healthy topsoil through holistic grazing Holistic grazing is a farming practice whereby the natural herding behavior of animals is mimicked. This has many benefits, one of them being the ground has enough time to recover. Find out more here: https://www.fwi.co.uk/livestock/grassland-management/what-is-holistic-grazing-and-what-are-the-benefits and leaving the soil untouched as much as possible in the no-dig market garden, Bodemzicht is able to capture more carbon than it is emitting. “We are climate farmers for life, producing healthy local food whilst addressing the climate crisis”, Anne explains.

Centralized food production has turned farming into a black box. It has become inaccessible and abstract, which causes misunderstanding and polarization.

According to Anne, the relationship between Bodemzicht and the nearby Dutch city of Nijmegen is ‘seriously strong’. “We directly market our produce to local people and restaurants. Every week, I do my rounds and I’m literally in the kitchens of the different restaurants with my crates, receiving their feedback. We are even working together with some chefs on our market garden plan for next year, so it is an extremely close and supportive collaboration. And the same goes for the people that come to the farm every Saturday to pick up their groceries. Some even help out on a structural basis.”

Instead of focusing on ‘feeding the world’, Anne believes in a food system that is local and regenerative. “Centralizing and abstracting food production is problematic for multiple reasons, one being that shipping food around the world creates more CO2. In addition, it sometimes leads to post-colonial practices, whereby the Western world exports its standardized intensive agricultural practices to other countries without respecting the specificity of place, culture and biosphere. Lastly, and most fundamentally, centralized farming does not lead to a deeper connection between people and food production. This lack of contact creates a lot of misunderstanding about what it takes to farm as well as an underappreciation of the work farmers do. By having smaller scale farms directly in and around cities, we can close the gap between farm and fork and teach people what it means to grow proper food. So hopefully, they start to become proud of farmers again.”

If all food was regenerative and local, cities would be more livable. Because you would no longer have a rigid divide between in and outside the city, but everything would be intertwined.

Anne believes that small scale regenerative farms like Bodemzicht can work anywhere, as long as we take cultural and ecological particularities into consideration. “You can’t copy-paste the model of one regenerative farm to somewhere else, but you can copy-morph it. What you can copy are the principles that regenerative farmers apply, like building top soil, increasing diversity and resilience of farm ecosystems and business lines, working as circularly as you can by collaborating with aligned partners and building a community around your farm. Then you take those principles and apply them to the specific context, soil, biosphere and culture. The essence is the same, but the form will always be different.”

How to start your own regenerative farm

For aspiring regenerative farmers who want to contribute to a world in which urban food production is local and sustainable, Anne has a couple of tips:

Journalist, writer and videographer. On a mission to contribute to a more just and regenerative world in which nature leads the way. Inspired and intrigued by the impact of local sustainable urban food systems.

Feel inspired by our latest stories, straight to your inbox

Embark on a journey around the world's most inspiring food producing cities!

Community Supported Agriculture: how it works and why it matters

Meet the urban beekeepers looking after the future of farming

Everywhere around the globe, people are creating sustainable food producing cities. Places that thrive socially, ecologically and economically. Subscribe to our monthly newsletter to stay tuned!